Last week I had the chance to tour Falling Water, the architectural wonder designed by Frank Loyd Wright.


I studied Wright in my college art history class so I knew the house was built over a river and waterfall. I still wasn't expecting something so integrated into the natural world. Walls of windows, low terraces and natural stone draw your eye outside. Everything about the house is simple, minimally functional and bent on driving you outside.


While it was designed by a famous architect, the father of the modern ranch house and all that jazz, our tour guide asked us to think about the clients who paid for Falling Water. The Kaufman's were a powerhouse couple in the 30's. Owners of Kaufman department stores, they had one twenty-seven-year-old son when they built Falling Water. Egar Kaufman was Jewish and despite his tremendous wealth couldn't join the country clubs of the time. Hi son, Edgar Jr. described Falling Water as a "rich man's toy."


Touring the house. it was easy to see the family dropping onto the low beds, sitting out on the flat terraces and listening to the gushing of the waterfall below. There was not a single book in Lilianne's room, yet Edgar Jr.'s was filled to the brim. Questions swim through my mind. What stories are held by the boulders jutting out of the mountain? What secrets pass through the currents moving below Falling Water? Why did Lilianne not a share a room with her husband? Why did Edgar Jr. never marry?


I could do research. I might even find answers. But the stories swirling in my head are sweet possibilities, pieces of which will swirl together until someday, someway, they emerge as stories to be. 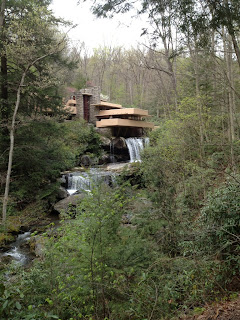 The apartment in Des Moines is clutter-free, light and airy. It's a perch, nearly a tower, three stories up in the trees. The boys are discussing fishing using fake accents and made-up words. The periodic wrestling matches shake the floor. Tickling, followed by fake roars and a fair amount of laughter emanate from behind me. The shower switches off. Tooth brushes are vibrating down the hall.

I sit in repose. I don't know exactly how one sits in repose, yet here I sit. I consider this rare Saturday away from home and outside my regular routine of running, running, running. Generally on mornings such as these I am ignoring the nagging sensation that I should clean up the house or at least fold some laundry. Various commitments loom ahead. Our modest home balloons to massive size with the list of things yet to do.

None of these commitments and lists exist in Iowa. This grand plain is a blank slate for my life. I have no one here save the three in this calm little space. Today sits before me in all its glory. This day is unclaimed, unplanned, untamed. Mine to live.

Stories to be written call to me.
Posted by Jenna G at 8:28 AM 2 comments