All of my ideas lately seem to involve an ancient race of people that have been hidden since the beginning of time. Their roots predate humans somehow. I like to think there are magical folk swirling around in the background. Just because I haven't seen them doesn't mean they aren't there, right?

How many ancient races of people could have survived? Ultimately, they would likely either have receeded into some other world or mated with humans. How much human blood does there need to be before the magic becomes a recessive trait?
Posted by Jenna G at 4:45 PM 0 comments

A question of faery blood...

My all time favorite book is The Mists of Avalon by Marion Zimmer Bradley. I read it in my mid-teens and pretty much converted it into my religion for at least a couple of years. Morgaine, the heroine, is a priestess of an ancient religion. It's a feminist retelling of the King Arthur myth. There's a scene in the book where she gets lost in the faery world, which has receded so far from the human world that time there no longer runs at the same rate as the human world. Morgaine can go to faery because she has a touch of faery blood.

I decided that way, way back there must be faery blood in my family, definitely on my mom's side, but possibly on my dad's side, too. You never know.

A couple of years ago my husband and I went to England. The amazing man that he is, he didn't blink when I wanted to leave London to embark on a six hour journey involving trains, buses and endless English countryside to visit Avalon. I had visions of parting the mists and calling up the barge. I'd probably be in the real Avalon now if we hadn't gotten to Glastonbury at  4 p.m. on Sunday after everything was closed. We climbed the Tor, but it turns out the water receded a long, long time ago.

I'm just into the first chapter of my third book and faeries are definitely figuring into the plot. They turn out to be nothing like Zimmer-Bradley's faeries, but I'm still sure I've got a little spark of faery in me somewhere.

Here I am in London on that trip... 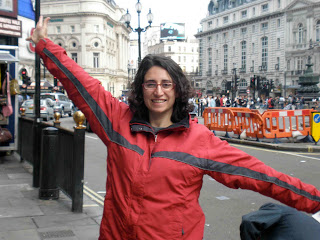 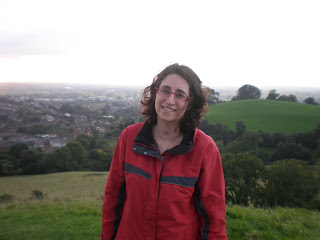 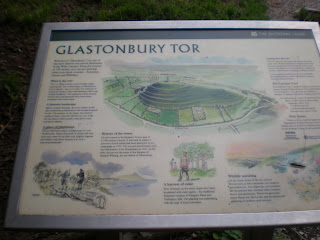 Self Publishing, Amanda Hocking and Me

When I first downloaded Amanda Hocking's My Blood Approves (which I reviewed on this site) I didn't realize she had self published the novel. Someone I follow on Twitter had posted a list of 99 cent Kindle downloads and I thought the description sounded interesting.

As I started reading the book I was attracted to the idea of the story. It rang a little bit too close to Twilight in terms of plot, but the post-Twilight junkie in me found I had to keep reading just for a taste of the familiar. As a writer, though, something nagged at me the whole time I read it.

There were little mistakes my critique partners wouldn't have let me get away with. There was the closeness of the plot to Twilight. I couldn't understand how the editor had selected the book. I enjoyed it in a lot of ways, but there was a certain rawness I couldn't put my finger on.

That's when I realized the book was self published. I enjoyed it enough to read the entire series, but something about the whole series of books left me just short of satisfied. I suspect that something is the magic that editors and the publishing process bring. Polish is the best word I have to describe it.

I could see her growth as a writer through the books. It makes me think about what so many writers have shared with me about not getting published until their second, third, fourth or even fifth or more books they've written. There's a readiness and a polish that comes from the process. Right now, I can't imagine self publishing. I can't say I'll always feel this way but it seems like skipping too many important learning steps. Maybe it's just taking the steps a different way.

It certainly seems to have worked for Amanda Hocking, self-publishing put her on the map and now she's moving to St. Martin's with her next series. But, for now at least, I'm going to keep writing, rewriting and querying.
Posted by Jenna G at 6:21 PM 0 comments

Check out the The Goddess Test

Aimee Carter's debut novel with Harlequin Teen is well worth the read. Apparently, I'm in a Hades/Persephone kind of mood these days. Meg Cabot's Abandon touches on the same subject. Both heriones are kind and good hearted people who care for others. I think The Goddessware herione, Kate Winters, is a serious and sad person by the time we meet her. Her mother is dying and she's agreed to go to her mother's hometown from New York to wait for her mother to die. Eden, the small town they visit, is anything but what she expects.

She ends up making a deal with the god of the dead, a sweet and sexy guy named Henry, that turns everything she's ever known upside down.

I'm not nearly as much of a movie fan as I am a book fan, but Easy A reminded me of a great YA novel. I was shocked to learn it wasn't based on a book.

It's the story of a rumor gone astray and a desire of popularity that turns into a desire for a little less notariety. A fun combination and a tribute to 80's teen romance movies to boot!