I'm so excited to host my first guest blogger! Ty Drago, author of THE UNDERTAKERS: RISE OF THE CORPSES is sharing a brand new short story on our site today. Even better, it's part of a progressive story over the next few days across blogs hosted by Frenzy of Noise and Wicked Awesome Books called YASpooktacular. Want to go back to the beginning of the story? Check out Pure Imagination. Tell all your friends... Tweet #YASpooktacular and tell them @Storiestobe sent you!

THE POND IN THE FOREST

“What is this place?” Laura demanded, pausing with the poker still clutched in her clammy hands.
The figure paused and looked back at her, silver eyes shining with malice.  “It’s a museum of sorts … a private collection.”

“See for yourself.”  He pointed toward a lever set into the wall.

Laura looked from him to the lever and back again.  “You try anything,” she said, “and I’ll bash your head in!”

The hooded figure made a sound.  A groan?  A laugh?  She wasn’t sure.

Laura crossed the room, her footfalls squelched by the layer of ooze that covered the floor.  With
one hand, she pulled the lever downward.

Cages.  And in them: people.  A lot of people.  Some were men, some women, many children.  Dozens of them, one per cage.  They squinted at her, as if unaccustomed to the light.  The nearest cage held a little girl, no more than eight, her angelic face twisted by fear and suffering

“Help us,” she whispered.

“What is this place?” Laura exclaimed.

“I told you,” the figure replied flatly.  “It’s my collection.”

She didn’t want to look at him, but she had to.  It was as if her gaze was pulled by a string.  And she saw him, saw him clearly.  Saw his bulging silver eyes, which seemed to protrude several inches from the sides of his thin, hatchet-shaped face.  His mouth was a lipless “0”, constantly moving, as were the gills — yes, the gills — visible just below where his ears should have been.

“It used to be ours,” he said, sounding strangely wistful.  “My sister’s and mine.  Every specimen we collected together, snaring them to our pond in the forest.  Goldfish made such wonderful lures.  We’d built a life.  We were happy.  Until they came …”

He pointed toward two of the furthest cages. In the first, Laura saw Brian.  He looked haggard and terrified, his pale face staring out at her through rusted, vertical bars.  And, in the next cage over, the beautiful Amanda – silently sobbing, her eyes vacant with suffering and despair.

“They came together,” the collector said.  “And we took them both.  But the boy was quick and clever.  He broke free and …” The creature’s voice choked a bit.  “Killed my sister before I cornered him.”

They had a deal, Laura thought bitterly.  “To trade me for Amanda,” she said.

“Yessss,” the collector hissed, an odd, fishy sound.  “But never would I have kept such a bargain.  Oh no.  Once you see my menagerie, there’s no going back.  So I let him have his precious mate, and then, as they fled, I snared them anew.  Now … I have all three of you.”

Laura ignored him.  To the collector, she said, “Open the cages.”

But he only laughed, a terrible sound.

To continue the story, go to The Reading Nook.

About Ty Drago
Ty Drago makes his home in Southern New Jersey with his beloved wife and son.  He also has a beautiful daughter, but she makes her home elsewhere these days (sniff!). His short fiction has appeared in several locations, including AMAZON SHORTS and HAUNTS. When he’s not writing, he spends his time working as a business analyst for a large pharmaceutical company. His newest novel THE UNDERTAKERS: RISE OF THE CORPSES is now available.

You can find Ty on Twitter, on his blog, on Goodreads and you can order his books here.
Posted by Jenna G at 12:00 AM 7 comments

I'm excited to be a part of this year's YASpooktacular! This great blog tour offers some amazing prizes (I for example donated a Charlaine Harris autographed novel for the grand prize pack). Beyond the prizes, the best part is a progressive story that lets you choose your own adventure! Check back here on Oct. 24 at midnight to get in on the story (and the prizes). Follow the adventure on Twitter #YASpooktacular.


What always amazes me about writer's conferences is the genuine desire of every person who attends to help others grow in their careers. Brenda Novak's keynote was about setting a goal, staying focused and not being afraid to stay with it.

Joanne and Catherine shared their experience as critique partners. The two friends were also joined by Melissa to share how to strengthen an agent/author relationship. These sessions reinforced for me the importance of openness to feedback, loyalty and trust. An important call-out for me in this session was the importance of reading widely in your critique partners' genres. I feel so blessed to be able to send pieces to my critique partners (thank you Connie and Kathleen) when I don't know what to do next or just need someone to say "you really do need to work on this" or "that actually works, stop stressing."

The agents and editors participated in a panel that highlighted the importance of strong writing, voice and knowing your audience. Lastly, Barbara Vey shared insider information about the business.

I had the opportunity to pitch my work, which is always exciting, but most importantly I was reconnected with the energy of this business. It's easy to sit alone in your house late at night pounding the keyboard and feel your energy dip. A conference like this will keep me sizzling with the feeling of community, even as I write alone, at least until the next COFW meeting.

As someone who has always written, but for years didn't think I could become an author, the writing community has introduced my dream to hope and possibilities. Anyone who wants to be a writer should sit down and write that first story. Then go directly to a writer's group and get engaged. Don't stop writing, but start polishing. Polish until the unique voice shines. Learn until you know enough to be dangerous, but don't stop learning.

Writing can be a hobby and a creative pursuit. It's fun and energizing. I write because I couldn't stop myself if I tried. Writer's conferences remind me that publishing my work is a business. I plan to stay at this business and continue to get a little better every day. One of these days I'll be in a position to pass on all the inspiration these authors, agents and editors have given me this weekend to another beginning writer. It may take time to reach publication. It will definitely take hard work but it will be worth it.

Brenda Novak called writing "a dream of the heart" and I think that's a wonderful way to describe how so many writers feel about their work. I'm going to keep working on this dream. I encourage anyone else who has the same dream to get out there and connect with authors, editors and agents in this industry. It's worth every second.

Below is a picture of me with Brenda Novak. She sat at our table and was the most gracious and engaging person. I'm diving into her book, Inside, later tonight, just as soon as I write another chapter of my in progress YA novel. 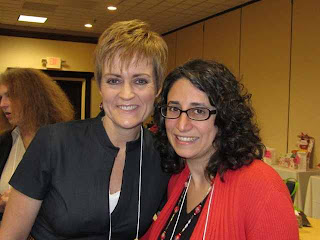