Fantastic Beasts and Where to Find Me

After months of waiting, watching the trailers more than once, searching online for clues and generally anticipating like crazy, last night I got to disappear into the Potter-verse again. My fabulous husband arranged for us to attend The Beastly Bash at the Gateway Theater.

The event was sponsored by The Ohio State University Center for Medieval and Renaissance Studies. These people make their living reading literature, exploring the other literature and stuff that it was inspired by and writing academic papers about their findings. Then they teach classes on topics I would be very inclined to find interesting.

So, Dr. Friedman from the University of Illinois, Urbana-Champaign gave a talk about the zoological and mythical sources for the Potter-verse. Which was interesting, but also not, because he totally read his paper out loud for an hour. He did, however, have some cool slides with pictures of mythical creatures from 1300 BC and pictures from the Harry Potter movies. I give the lecture 3 stars.

The five star fun started after that when Dan the Baker gave us all wands made of bread (check out the picture below!) and Dough Mama fed us treacle tarts (Harry's favorite!). We had Fudge and snitch shaped golden desserts and Butter Beer! Then we headed into the theater to see the movie. The Gateway is a nonprofit, independent theater and the manager shared with us that Harry Potter fans are always the kindest and best crowd because of the themes in the books about love. Bonus points to him for his Black Lives Matter t-shirt. I give the Gateway Theater 5 stars. 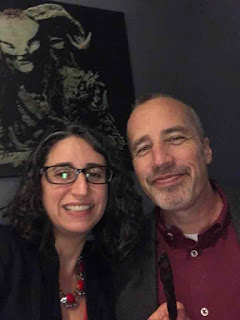 After that the movie started. My expectations were so high. Anticipation filled my lungs and then....

The movie met every last expectation I had and then some. 6 star out of five! First of all, the main character was named Tina Goldstein. GOLDSTEIN! Which is my maiden name. And, so clearly JK Rowling has written this series just for me. Entirely for me. Obviously.

Okay. Okay. Not, really. But, still. That was cool for me. You probably don't care so I will share a few other things I loved.

Jacob the Baker. The most lovable muggle ever. I know I should say, No-Mag, but I don't think that's going to happen. I'm just going to speak wizard with an English accent. Let's just assume I went to Hogwarts. I studied abroad.

This kind of thing happens. Get past it. But, please don't get past Jacob.

Evil guy who I knew was even more evil than expected from very early on in the movie. Spoiler Alert #2. I totally called the true identity of Graves in his third scene. I love being right!

Queenie. She saves the day and she reads minds, all while being loving and an awesome cook. She's the real deal.

Go see this movie now. I'm going to see it again in the theaters this week.

Fantastic Beasts is where you'll find me!